Welcome to the new AquaticSnake.org website and blog. In an effort to stimulate interest in aquatic snake we provide information on the evolution, ecology, and biology of aquatic snakes as well as systematics. If you would like to participate please feel free to contact us at serpentresearch@gmail.com. 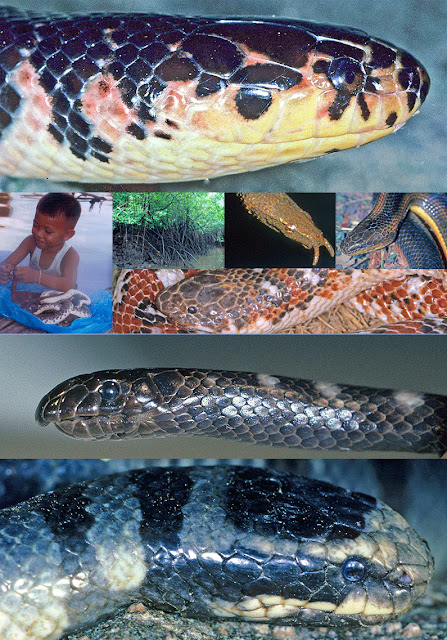 While we are going to focus on the non-sea snakes, we will eventually include them if someone volunteers to write up the accounts. They will be discussed in the blog and research portions of the website.


Relatively few of the 3400 species of snakes show extensive adaptations to freshwater environments and even fewer exploit the oceans. Only about 70 (2.7% of all snakes) are sea snakes (Hydrophiinae and Laticaudinae). The ancient aquatic family Acrochordidae contains three extant species, all of which have populations inhabiting brackish or marine environments, as well as freshwater. The Homalopsidae have the most ecologically diverse representatives in coastal habitats. Other families containing species exploiting saline waters with populations in freshwater environments include: the Dipsadidae of the western hemisphere, the cosmopolitan Natricidae, the African Grayinae, and a few Colubridae and Viperidae. Snake species inhabiting freshwater are more common than marine snakes despite the fact that bodies of freshwater cover less than 1% of the the earth's surface. Yet there are at least twice as many snake species using freshwater as compared to salt water.

Here you will find photographs and information on living and extinct aquatic snakes, bibliographic references, links to PDF's, and summaries of recent scientific research and species accounts. The species accounts can be accessed through the menus on the sidebar. We are providing accounts for all of the acrochordids and homalopsids, and restricting the accounts to the aquatic dipsadids, natricids, and other higher taxa.

Snakes have evolved into aquatic and marine habitats multiple times, and some of the aquatic snakes may have reversed evolution and returned to terrestrial ways of life.