The Western Amazonia appears to have been a Neotropical nucleus for freshwater aquatic snake evolution. Hoorn et al. (2010) reviewed the characteristics of this mega-wetland and its different phases of development. The region once consisted of fluvial systems that originated on the Amazonian Craton and were directed towards the sub-Andean zone and the Caribbean. In the Early Miocene the fluvial systems were largely replaced by lakes, swamps, tidal channels and marginal marine embayments, forming a mega-wetland. 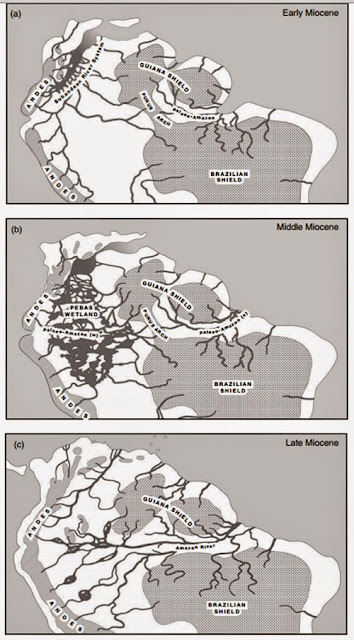 The aquatic environments supported a diverse fauna, the shores of the system were fringed by palm swamps, and a diverse rainforest was present in the uplands. The origin of the wetland was primarily driven by the Andean uplift, and an increase in accommodation space in the sub-Andean and intracratonic basins; and high precipitation rates.

Boreholes drilled in the sub-Andean foreland basins of Peru and Colombia, and in the intracratonic Solimões Basin of western Brazil provide the earliest phase of wetland development. At the end of the Oligocene to the Early Miocene (~24 to 16 Ma) lacustrine conditions alternated with episodes of Andean and cratonic fluvial drainage as well as marginal marine influence.

In Amazonia, marine incursions are recorded as thin beds in the Middle to Upper Miocene fluvial strata and contain marine and coastal taxa (foraminifera, mangrove pollen). Lacustrine conditions expanded further during the Middle Miocene to early Late Miocene (~16 to 11.3 Ma; Pebas phase). During this period the lake-embayment and swamp systems – fringed by forested lowland – reached their maximum extension. This wetland was subject to marginal marine influence and sustained a large radiation of endemic aquatic invertebrate faunas.

During its maximum extent the wetland covered an area of more than 1.5 million km2 comprising much of the present western Amazonian lowlands. From the Late Miocene onwards uplift rates in the Eastern Cordillera, Cordillera Real and Cordillera de Merida substantially increased and the Andes became a continuous barrier. This barrier effectively separated lowland Amazonia from Orinoquia and the Magdalena Valley and closed off all lowland connections with the Pacific and the Caribbean. The wetland system became a complex environment where deltaic, estuarine and fluvial environments coexisted. This Late Miocene fluvial-tidal-dominated wetland (~11.3 to 7 Ma, Acre phase) hosted a species-rich vertebrate fauna, but (in contrast to the Pebas phase), the molluscan fauna was species poor and already strongly resembled the modern Amazonian fluvial fauna. This system represents the onset of the transcontinental Amazon River. From 11.3 Ma onwards, sediments of Andean origin reached the Atlantic continental shelf and initiated the build-up of the Amazon Fan.


While the snake fossils from the Pebas system have not been published on, Salas-Gismondi et al. (2015) report on the crocodylians from two new species-rich bonebeds from late Middle Miocene proto-Amazonian deposits of northeastern Peru document the same hyperdiverse assemblage of seven co-occurring crocodylian species. The faunas evolved within the dysoxic marshes and swamps of the long-lived Pebas Mega-Wetland System and declined with the formation of the transcontinental Amazon drainage, favoring the  diversification of longirostrine crocodylians and more modern generalist-feeding caimans. The rise and demise of distinctive, highly productive aquatic ecosystems substantially influenced evolution of Amazonian biodiversity hotspots of crocodylians and other organisms throughout the Neogene.