The Sea Snake Assemblage in the Muar Estuary 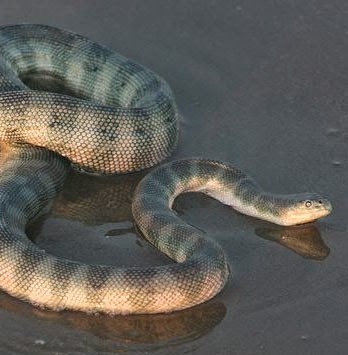 The first major survey of marine snakes was published by Malcolm Smith and covered the coastal areas of the Gulf of Thailand and the Malay Peninsula between 1915 and 1918 and yielded a collection of 548 sea snakes representing 17 species. These snakes were obtained as by-catch from local coastal fisherman using a variety of fishing techniques. In the late 1930’s and early 1940’s Bergman reported on another large collection of marine snakes from coastal areas near Sourabaya (Surabaya, Java). The collections were made by local fisherman between 1936 and 1942, and consisted of 984 specimens representing six species (3 or more additional species were “disregarded” due to rarity). This collection may represent the first major collection of marine snakes in which all specimens from a single coastal area were caught, retained and identified, thus providing both the species richness and some data on relative abundance.


After World War II the use of mechanized diesel-powered bottom trawlers expanded in Southeast Asia and as the demersal fish harvest increased, so must have the marine snake by-catch. This technology allowed for numerous sea snake surveys that covered very large geographic areas (80,000 to more than 120,000 km2) such as Tonking Bay, the South China Sea, the Sahul Shelf, the Gulf of Carpentaria and northern coast of Australia, the Gulf of Thailand, and coastal areas of Borneo. Although many of these surveys resulted in both a species count and the relative abundance of each species, they lacked value at the level of ecological communities because the areas sampled were vast and often ill-defined.


Now, Voris (2015) reports on an extensive collection of marine snakes obtained from a few stationary stake nets in one locally defined area of about two square kilometers. Each captured snake was identified to species and tallied over a period of nine months to allow for overall estimates of species diversity as well as comparisons of diversity between collections from different stake nets within the area, and between collections made during different tidal cycles. This survey of marine snakes in the mouth of the Muar River had two goals. First, it aimed to determine the overall marine snake diversity in the river mouth. Second, it sought to determine if there might be differences in species diversity on a small spatial scale.


He found the marine snakes that inhabit the mouth of the Muar River have adapted to a very dynamic tidal environment that is relatively small in area and spatially restricted by shorelines on two sides. In addition to the hourly changes in salinity, turbidity, speed of the current and direction of flow, the river also varies in depth. Extensive sampling over many months at Muar revealed an assemblage of marine snakes that included one very common species, three common species, four rare species, and three very rare species that likely represent waifs. These collections strongly support the view that the numerical marine snake species richness for the mouth of the Muar River is eight species.


Although the Muar River sample represents an assemblage from only one river mouth, the eight species observed at Muar falls in the middle of the range of 5 to 12 species recorded in other surveys. Yet, when it comes to relative abundance the strong dominance of E. schistosa in the Muar River mouth community makes the Muar assemblage the least diverse of all comparable surveys. The comparisons highlight the unique nature of the marine snake survey at the mouth of the Muar River, the only discreet estuarial location in the world that has been surveyed for relative abundances of marine snakes.