Myron richardsonii Gray, 1849 Catalog of specimens of snakes in the collection of the British Museum, p. 70. Type locality: North West Australia. Holotype: BMNH 1946.1.2.43. Collector: Sir J. Richardson. [type specimen is a female and has had the skull removed.]

Myron richardsoni – de Rooij, 1917 Reptiles Indo-Australian Archipelago, 2:192.  Figures 73 and 74.
Etymology. The name richardsonii is in honor of Sir J. Richardson, the collector of the holotype.

Distribution: Coastal northern Australia, from the Gulf of Carpentaria this range is most likely disjunct and its presence is most likely dependent upon the presence of mangroves. It also occurs along New Guinea’s south coast.

Diagnosis: A small, mottled gray-brown-black homalopsid; with a white belly and cream color on the first two scale rows. The internasal separates the nasal scales.  There are 19 - 21 scale rows at mid-body, with rows above number six containing keeled scales. 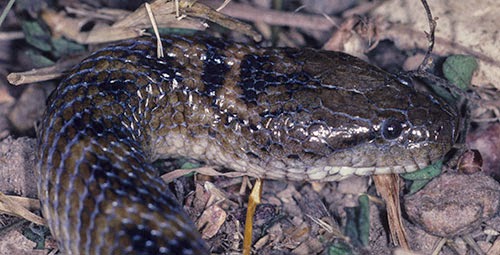 External morphology: The head is distinct from neck, moderate in length and not depressed. The eyes are dorsolateral and their diameter is less than the eye-mouth distance. On the head the rostral scale is about as tall as broad, and the dorsal margin is rounded. The nasals are completely separated by the internasal; and they may be divided or semi-divided with the nasal cleft touching the first labials and or the internasal. The internasal is triangular and equal to or slightly larger than a nasal scale. The prefrontals contact the loreals and each has about the same area as a nasal; they also contact the supraocular and or pre-ocular scales. The frontal length is slightly less than the interorbital distance and it is pentagonal. The parietals are about 1.25 times the length of the frontal. The single supraocular is elongate and quadrangular; preoculars may number one or two; postoculars are usually two. The bottom postocular scale may go under the orbit and keep the labials from entering. The temporal formula is 1 + 2. Upper labials number 8 - 10 (usually nine). The largest is usually the sixth, but may be five, seven, or eight. The fourth through sixth enter, or occur below the orbit, and upper labials 2 - 4 or 2 - 4 contact the loreal scale. The upper labials are slight flared outward and there is a groove formed just above them. On the chin the lower labials number 9 - 12 (usually 10). The first three contact the anterior chin shields. The fifth or the sixth is the largest. There are three pairs of chin shields, the first or second may be the largest; the third pair is separated by small scales. Gulars number 3 - 4. On the body the dorsal scales rows on the neck and at mid-body number 19 - 21, and near the vent dorsal rows number 17 - 19 (usually 19). Scale rows 1 - 5 are not keeled; all the other rows have keeled scales. Gyi (1970) reported that males have strongly keeled scales on the dorsal rows anterior to the vent. Dorsal scale rows 1 - 6 are extremely ovate, other rows become lanceolate toward midline. Ventral scales number 131 - 138 (131 - 138 in males, 131 - 135 in females). They are wide, about 3.5 times the length of a nearby dorsal scale. The anal plate is divided, and is about twice the length of the preceding ventral. On the tail the divided subcaudal scales number 31 - 39, (33 - 39 in males and 31 - 34 in females). Dorsal scales on the tail are similar to those anterior to the vent.

Color and pattern. Most specimens are a purple gray with 35 - 48 dark dorsal spots that are 5 - 6 scale rows wide on the midline. Scale rows 1 - 2 have white pigment. Each ventral has a dark anterior margin. Posterior upper labials are light while the anterior ones are dark. The chin is cream. There are several color morphs of this snake and some specimens may be almost black, while other specimens are orange. Color polymorphism is also seen in other homalopsids of the Sahul Shelf.

Habitat: Myron richardsonii uses mangroves, nearby mud flats, tidal rivers, and other associated habitats. Like Fordonia and Cerberus it uses the intertidal burrow system and does not hesitate to burrow into liquid mud (Glauert, 1950; Gow, 1989; O’Shea, 1986; Worrell, 1963). Gow (1989) considered this a nocturnal snake that lives in small colonies. Parker (1982) observed this snake in New Guinea and wrote it is, "...found along with Fordonia leucobalia, but is far less common. Only 33 were recorded from daru island, and a few from Abam, Emeti and Buji on the south coast. None were caught on Bobo island, which appears unusual. Most were found swimming in shallow water among mangroves with larger numbers of Fordonia. At Emeti they were in fine soft mud at low tide – they would swim and dive into the mud as if it were water, and they always dived into the mud to escape. A few were off the Daru wharf at high tide, and one was caught at night at sea in a net, 2 km off Buji.

Diet and Feeding Behavior: Fish of the family Goboidae are the only prey i have found in their stomachs. Although both Worrell (1963) and Gow (1989) have suggested it feeds on crustaceans. Nobbs and Blamires (2004) reported finding a nudibranch (Mollusca: Gastropoda) in the mouth of a specimen. Gow (1989) suggested it feeds in and around pools of water. Shine and Schwaner (1985) reported it uses constriction on small fish. Gyi (1970) noted this species has long anterior mandibular teeth, and these may be useful in snagging and holding slippery gobies or slime covered gastropods. Greer (1997) suggested that the one caught at night suggests this species may forage in deep water.

Predators: Taylor (1979) took one from the stomach of a Crocodylus porosus.