Enhydris enhydris – Parker, 1982 Snakes of the Western Province, no pagination.

Note: Some Australian herpetologists consider polylepis and macleayi distinct species. They may be correct in the sense that this may well be a complex of two or more species. But, the details need to be worked out using both molecular and morphological evidence.

Distribution: The coastal plains of northern Australia (Queensland, Northern Territory and southern New Guinea, it is also known from the island Groote Eylandt (a continental island). There is a record of a specimen (CAS 135490) from Yongtau, New Guinea that was found at 1800 ft (548 m) above sea level. It seems likely that this species will eventually be found in Western Australia, but records are absent.

Diagnosis: In Australia it is the only freshwater homalopsid. It has 21 - 25 rows of smooth scales at mid-body, 137 - 162 ventral scales, and upper labials five or 5 - 6 under the orbit. Myron, an Australian homalopsid has 19 - 23 rows of keeled scales at mid-body and the nasals separated by the internasal, a character state not found in Enhydris. The presence of upper labials five, or 5-6, under the orbit and the contact between upper labials 2 - 3 or 2 - 4 with the loreal should separate it from all other Enhydris. The pattern and coloration of some polylepis is most similar to E. enhydris, which has upper labial number 4 under the orbit, and upper labials 1 - 3 in contact with the loreal scale, and it usually has more than 153 ventral scales. It can be distinguished from Enhydris punctata, which has 23 - 27 scale rows at mid-body, on the number of upper labials, punctata has more than 10, and polylepis has eight. Also, it should be noted that this is the only Enhydris to have keeled dorsal scales, these scale ornaments are found only on the posterior dorsal rows. 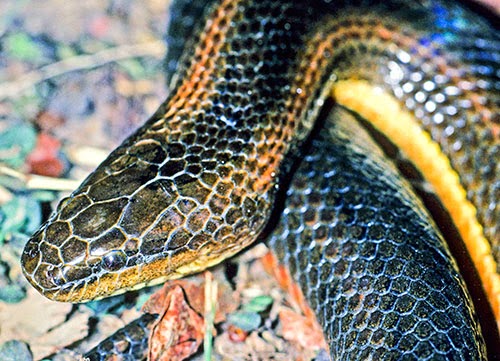 External Morphology: The head is depressed and elongated; the body is cylindrical; the eyes are dorsolateral. On the head the rostral scale is pentagonal and 2 - 3 times wider than tall, and it is barely visible from above. The nasals are in contact, they are equal to or larger than, the prefrontals and they are very irregular in shape; the nasal cleft touches the first or second labial; and they are slightly penetrated by the internasals. The internasal may be single or double, and it may or may not make contact with the loreal. The prefrontal scales are larger than the internasals and may extend between the loreal and the preocular to contact the upper labials in some specimens. The frontal is triangular and may show signs of fragmentation. The parietals are longer than the frontal. The loreal is single and makes contact with upper labials 2 - 3 or 2 - 4. The ocular ring is composed of a quadrangular supraocular; a preocular that is usually single, rarely double; two postocular scales; and no subocular scales, instead upper labials 4 - 5 or 5 - 6 enter the orbit (rarely is only number four in the orbit, and one specimen had 6 - 7 in the orbit on one side). The temporal formula is 1 + 2. Upper labials usually number eight, but one specimen had seven on one side, another had nine on one sided (of  52 sides). The largest upper labial is number five. On the chin lower labials number usually number 11, but they can number 10 or 12. The largest lower labial is usually number six, occasionally it is number seven.  The first three lower labials contact the anterior pair of chin shields. There are two pairs of slightly enlarged chin shields; the pairs are about equal in size; and a pair of smaller scales separates the second pair. The chin shields are often tuberculate. Gular scales number 8 - 9. On the body the dorsal scale rows on the neck are usually 23 (AMNH 82443 has 29, and MCZ 134898 has 26). Dorsal rows at mid-body usually number 21 in the Queensland population, 23 in the Northern Territory population, and range from 20 - 25 in the Papua New Guinea population. Table 14 summarizes dorsal scale row counts and ventral counts from various parts of the range and includes data O’Shea (1996) has reported on scale differences between the upper Fly River and Trans-Fly populations (New Guinea) of this species. Scales on the body tend to be ovate in the first row and become more lanceolate toward the midline. Dorsal rows in the posterior third of the body are keeled and striated. Scales on the dorsum of the tail are similar to those on the body, keeled, striated, and sometimes tuberculate. The ventral scale count range is 137 - 162; my data suggests that ventral scale counts are not sexually dimorphic in this species,that may change as individual populations become better known. At anterior body the ventrals are 3 - 4 times wider than the height of a nearby dorsal; at midbody they are three times as wide as a nearby dorsal, and at posterior body they are about 2.5 times as wide as a nearby dorsal. Based on the sample examined no geographic variation or sexual dimorphism in the ventral count of this species has been found. The anal plate is divided. On the tail the divided subcaudal scales number 37 - 46. There appears to be no sexual dimorphism or geographic variation in the subcaudal counts when all populations are lumped together, but Table 14 suggests that the Queensland and Papua New Guinea populations have sexually dimorphic subcaudal counts and tail/SVL ratios. However, I have not seen any males from the Northern Territory. At the base of the tail the width is 82% of the height based on the average of five specimens. Color and pattern. The pattern of this species is highly variable. Often there is a dark stripe on scale rows 1 - 2 and the dorsum is a uniform brown, and the ventral surface is cream (Plate 26, Figure F). The underside of the tail has a dark stripe or may be mottled. The dorsum may have dark spots or indistinct bands. The ventral surface is mottled in some specimens. The chin is mottled and some specimens have an eye stripe that extends into a postocular stripe that borders the light stripe on scale rows 1 - 2. O’Shea (1986) described a juvenile from Papua New Guinea’s Western Province as having dorsolateral orange stripes extending the entire length of the body. The stripes are edged with dark pigment, as are the two ventrolateral cream stripes.

Habitat: This is a freshwater species that uses backwaters, billabongs, lagoons, swamps, marshes, creeks, rivers, stream impoundments, and other wetland habitats. Like many other homalopsids it rarely leaves the water to travel overland. Museum material (USNM 213440) notes states, “On floating vegetation and mud at night, burrows into mud when disturbed.” Thompson (1935) wrote, “Hypsirhina polylepis was numerous in freshwater lagoons in the vicinity of the estuary of the Archer River, and a single specimen was secured in the swiftly-running water of the Coen River, a tributary of the Archer, at Coen. The snake was also abundant in the swamps close to the Edward and Coleman Rivers in the Gulf of Carpentaria….” Cogger (1981) reported it from floodplain and paperbark swamps. Gow (1989) wrote, “A nocturnal aquatic species, only found in freshwater habitats such as swamps, billabongs, creeks and rivers. It prefers areas of overhanging banks, especially those with dense pandanus root systems. In still waters it often shelters among the matted roots of floating water plants.” Griffiths (1981) observed them “lying on the bottom of large still pools with the front portion of their body covered in leaf litter and just the tip of the snout protruding.” Parker (1982) reported one from a well, and also found it in swamps parallel to beaches. Worrell (1963) found that in the wet season this snake appears in low-lying parts of the streets of Cairns.

Diet and Feeding Behavior: This species has been reported to eat crustaceans, fish, frogs, and their larvae. There is also a report of it scavenging chicken bones (Cameron and Cogger, 1992). Shine (1991a) found one to contain the shrimp Macrobrachium sp. (Family Palaemonidae) and the oxeye herring Megalops cyprinoids (Family Eleotridae). Shine describes the oxeye herring (16 cm, 51 g) being captured by the snake (79 cm, 320 g). The snake seized the fish in 50 cm deep water that was flowing fast. The fish leaped out of the water and partially lifted the snake out of the water, but it retained its hold on the fish, and the prey died in less than two minutes. The prey-predator mass ratio was 0.16. Thompson (1935) wrote, “The usual food of this snake, on Cape York Peninsula, consists of small frogs. Specimens in captivity readily capture and swallow frogs when in the water.” It may use both ambush and active searching to locate prey. Griffiths (1981) suggests that this is an ambush predator; he observed one along a stream in mid-morning with its body on a root out of the water and its head in the water, apparently waiting for fish. However, Kinghorn (1929) reported one, “…observed by R. Mackay apparently stalking a small fish in a pond off the Peach River, Cape York.”
Shine et al. (2004) studied the foraging behavior of this snake in the field and found it takes sleeping fish in shallow water. The fish were located visually detecting movement and strikes are elicited by tactile cues created by splashing water. The snakes were observed during a seasonal aggregation in shallow water due to wet-season flooding. The snakes were feeding mostly on 3 - 8 cm purple spotted gudgeons; Mogurnda mogurnda (Family Eleotridae) but they also took rainbow fish, tarpons, and eels.

Predators: Shine (1991b) contains a photograph of a long-necked turtle, Chelodina rugosa, regurgitating an Enhydris polylepis. Thompson (1935; 1949) found that the aboriginal people living near the Coen River prize this species as food. Parker (1982) wrote about the people in Papua New Guinea’s Western province collecting this snake, “Villagers catch them by wading barefoot into the swamps, feeling for the snakes with their feet…Villagers of Sigabaduru eat this snake.”

Population and Abundance: Griffiths (1981) believed this snake to be common. Shine et al. (2004) did a mark and recapture study at Fogg Dam in the Northern Territory and suggested that there were several thousand animals in the population.