Etymology: The name longicauda is undoubtedly derived from the Greek or Latin long meaning “length,” and the Latin cauda meaning “tail”. This refers to the relatively long tail of this species.

Distribution: This species is restricted to Cambodia’s Great Lake, Tonlé Sap and the immediate surroundings. This extensive and dynamic wetland ecosystem is part of the Mekong drainage basin.

Diagnosis: A snake with 21 rows of scales at mid-body, 124 - 133 ventral scales, and a dorsolateral pattern that is mostly black-purple with large, lateral, dark scalloped blotches. It can be distinguished from other Indochinese species with 21 scale rows at midbody by the following characteristics. In pattern and color it is most similar to Enhydris jagorii and Enhydris innominata. However, both jagorii and innominata demonstrate sexual dimorphism of the subcaudal scales and show less lateral compression of the tail. These two species also have different ventral scale count ranges, jagorii has 117 - 127, and innominata has 108 - 117. Enhydris chanardi has fewer scale rows (20 - 22) around the neck compared to longicauda (23 - 25), fewer ventral scales (110 - 122), and a distinctive pattern of lateral spots involving 2 - 4 scales on scale rows 4-6. Enhydris enhydris and Enhydris subtaeniata also have 21 scale rows at midbody, but they have a dorsal pattern of longitudinal stripes. E. subtaeniata has lateral spots on scale rows 4 - 6, and a ventral scale count range of 136 - 153, E. enhydris have more than 153 ventrals. Both these species have striated scales, while longicauda, chanardi, jagorii, and innominata do not. See Table 11 for a comparison of the other species in this group.

Size: Of 39 specimens measured the longest female had a total length of 803 mm and a tail that was 163 mm. The longest male had a total length of 676 mm and a 173 mm tail. The tail of this species range from 23 - 35% of the SVL: 23 - 35% in males and 25 - 35% in females. Thus, this species shows no sexual dimorphism in tail length, an unusual condition for a homalopsid; this is also reflected in subcaudal counts. The wide range in tail length may have resulted from damaged tail tips that were undetected.

The head is relatively short, distinct from neck, and slightly depressed. Its head is much wider than the head of E. innominata. The eyes are dorsolateral and their diameter is about two-thirds of the eye-nostril distance.
On the head the rostral is pentagonal and about 2.3 - 2.5 times broad as it is tall . The nasal scales are in contact and semi-divided with the nasal cleft touching the first labial. The broad internasal may be single or double and slightly penetrates the nasals, it has almost the same area as a single nasal scale, and it contacts the loreal scales on each side of the head . The two prefrontal scales contact the loreal and the supraocular. They are irregular in shape. The rectangular frontal is slightly shorter than the interorbital distance. The parietals are almost the same length as the frontal. The single supraocular is rectangular. The single loreal is contacted by upper labials 1 - 3. The preocular is usually single, rarely divided. It is rectangular with the dorsal edge narrower than the ventral edge. There are two postocular scales (rarely one or three) the upper one is larger and taller than the bottom scale. The temporal formula is 1 + 2. There is an enlarged scale where the third row of temporal scales should start, and the scales below it are indistinguishable from dorsal scales. The primary temporal is taller than broad, however, it is small, and the secondary and tertiary temporal scales are barely distinguishable from the occipital scales. Upper labials number eight (rarely nine); the largest is usually six (rarely seven); the fourth usually enters the orbit, rarely the fifth enters the orbit.
On the chin lower labials number 9 - 12 (usually 10), the largest lower labial is usually six, rarely seven. There are two pairs of enlarged chin shields; the anterior pair is larger. The anterior pair contacts lower labials 1 - 4. The second pair of chin shields is separated by a pair of smaller scales. Gulars number 7-10.
On the body the anterior dorsal scale rows number 23 - 26 rows, with 24 being the most frequent count. Scale rows at midbody number 21. Scale rows at postbody are reduced to 19 or 20. The scales become more ovate posteriorly and show no ornamentation. The scales in the first row are larger than those in the second. Dorsal scales on the tail are ovate, and they number 8 - 10 rows at the base of the tail. Ventral scales number 124 - 136; males have 126 - 131 and females have 124 - 136. They are relatively wide, 3 - 4 times the length of a nearby dorsal scale. The ventral scales are rounded. The anal plate is divided and almost the same length as a ventral or slightly longer.
On the tail the subcaudal scales are divided and number 53 - 76, males have 52 - 75 and females have 53 - 76. Thus this species shows no sexual dimorphism a character that will separate it from E. jagorii (males have 53 - 68 subcaudal scales and females have 48 - 54) and E. innominata (males have 51 - 56 subcaudal scales, while females have 42 - 49). Thus, even though the subcaudal scale ranges of these species overlap E. longicauda lacks sexual dimorphism in this character; this character state is also supported by data presented by Saint Girons (1972). The tail is more compressed posteriorly than at the base, and the dorsal crest is sharply defined, this is not the case in innominata or jagorii. At the base of the tail the width is 74% of the height based on an average of five specimens.
Color and Pattern. The head is uniform gray or black with indistinct darker spots on each head plate. Adults have three rows of dorsal spots that do not fuse as in innominata. Some upper and lower labials have a central yellow spot. The venter is a uniform black, but some specimens have scattered yellow spots. The dark ventral pigment intrudes on to dorsal scale rows 1 - 5 or 1 - 6 to form a scalloped pattern. Yellow spots or crossbars less than one scale row wide occur between the constricted areas of dark pigment, these number 34 - 41 on the body. The venter is a uniform black in some specimens. The chin is often yellow or contains a significant amount of yellow pigment. There are 35 - 40 black bars or spots on the vertebral row of dorsal scales and they involve 2 - 3 paravertebral rows. 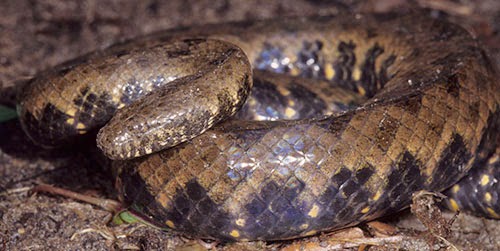 Habitat: This highly aquatic snake may leave the water on rare occasions, but as Tonlé Sap undergoes seasonal changes in water level it is unclear if this snake moves with the water, or estivates in the mud; Saint Girons and Pfeffer (1972) suggested it is inactive during low water. Thus, how this snake deals with dramatically fluctuating water levels is unresolved. Do populations at the perimeter of the lake burrow into the mud and remain quiescent during the dry season, or do they move toward the center of the lake as the water recedes? The first hypothesis seems more likely. This snake is endemic to the Tonlé Sap freshwater swamp forest of the Indochina Bioregion (Wikramanayake et al., 2002).

Diet: This species feeds on fish. One specimen examined contained an 89 mm Trichogaster tricopterus (Family Anabantidae). Saint Girons (1972) stated that he found one or two fishes in the specimens he examined.

Reproduction: One specimen (FMNH 259280) contained 18 oviductal eggs, and interestingly one well developed embryo (0.9g, 104mm long) that had apparently died and lodged in the female from the previous litter. It was severely dehydrated and contained no yolk. The female was collected on 28 June.

Predation: Stuart et al. (2000) found that longicauda was harvested at Tonlé Sap, and that in combination with Homalopsis buccata, they comprised about 20% of the 8500 snakes caught daily between July and September. Six years later, Brooks et al. found it composes about 8% of the catch.  Fishers sell the snakes for crocodile food. They also proposed an educational campaign to inform the local people about this endemic snake.