1849 Gerarda bicolor Gray, Catalogue of Specimens of Snakes in the Collection of the British Museum, p. 77.  Type locality: "West Indies," from Mr. Launa's collection.  This type locality is in error. Holotype: BMNH 1946.1.2.33.

Etymology
Wall (1921) stated that this species was named in honor of Monsieur Prevost, Superintendent of the Paris Museum at the time specimen was named.

Distribution
Gerarda prevostiana is distributed in coastal areas from the vicinity of Bombay, India westward to the Philippines, this distribution may be discontinuous. While it seems probable that it is present in Indonesia I have seen no specimens or literature references to specific specimens that suggest its presence there. It also seems absent from tropical coastal China. Manthey and Grossmann (1997) have a map that suggests it is restricted to the west coast of Myanmar, Thailand, and the Malayan peninsula; however Taylor’s (1965) specimens (a series of 15) were collected in Chon Buri Province along the coast of the Gulf of Thailand.  Iskandar and Colijn (2001) consider it present in Indonesia but list no specific localities or specimens and they list the Philippine type locality as an error (probably following Gyi’s comments). However, Auth et al. (1990) verified that it is indeed present in the Philippines. The verification of its presence in the Philippines took 153 years (Murphy and Voris, 2002).  The distribution may be disjunct but this snake should be expected wherever mangrove forest is found. Due to its secretive habitats it has been considered rare by many authors, but because of its habits it cannot be easily deleted from a faunal list from any area with mangrove forest between Bombay and the Philippines. However, the apparent total lack of specimens from Indonesia is puzzling.  Its distribution overlaps with several other widespread coastal homalopsids, including its sister species Fordonia leucobalia and members of the genus Cerberus, except that Gerarda is absent from the Sahul Shelf (Australia and New Guinea). 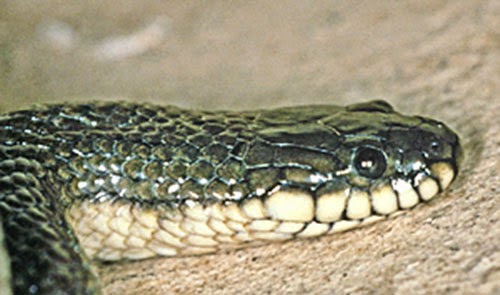 External Morphology
The head is slightly distinct from the neck and slightly depressed. The body is cylindrical to slightly depressed. The eyes are dorsolateral, but more lateral than dorsal.
On the head the rostral is a constricted rectangle, about twice as broad as high, and is barely visible from above. The nasals are entire and separated completely by a large internasal that is equal or greater than the nasals. The internasal is not in contact with the loreal. The prefrontals are about equal to the nasals in size. The frontal is relatively short, its length being less than the interorbital distance, and the eye-nostril distance. The parietals are long, about 1.2 times the length of the frontal. The loreal is about as long as high, and in contact with the first three labials. The supraocular is close to being rectangular. The preocular is single and taller than long. There are two postocular scales (rarely three), the upper one is smaller, and the lower scale partially underlies the orbit. There are no subocular scales. The temporal formula can be 2 + 2 or 1 + 3. The upper labials number seven or eight, the fourth labial enters the orbit. The head shields on these snakes are imbricate and are frequently pitted or eroded.
On the chin the lower labials number 7 - 9, the first four (rarely five) are in contact with the anterior pair of chin shields. Gulars number three to five, usually five.