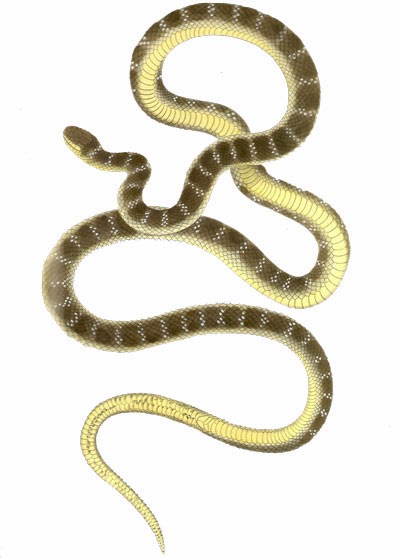 External Morphology:The body is slightly compressed and very elongated. The eyes are dorsolateral, and round. The head is relatively short, slightly depressed, and slightly distinct from the neck. Head scales are imbricate. Lower jaw is slightly countersunk.

On the head the rostral scale is about 1.2 times wider than broad and barely visible from above. Tubercles are present on the head scales of males. The nasal is entire or semi-divided with the cleft touching the internasal. The nasals are separated by a single internasal, thus they are not in contact. The single, pentagonal internasal is almost as large as a nasal scale. The prefrontal scales are almost as large as the nasals, each contains a white spot. The frontal is as broad as it is long and may contain one or two light spots. The loreal is single and in contact with the first two, or first three upper labials. Supraocular scales are single in all specimens and are quadrangular or hexagonal. The ocular ring scales consist of a preocular, postocular, and subocular; all are single scales in all specimens examined. There is one primary temporal scale that is greatly elongated;  and one secondary temporal scale is present, the temporal formula is 1+1. There are five upper labials, the largest is the fourth, and none enter the orbit because of the subocular scales. These also have small tubercles in male specimens.
On the chin lower labials number 7 - 8, with the fifth being the largest. The first three are in contact with the anterior pair of chin shields. These have small tubercles. There are two pairs of enlarged chin shields along the mental groove; the shields are about equal in size. The gular scales number three or four.
On the body the dorsal scale rows on the neck and midbody are in 19 rows, and they are reduced to 17 rows near the vent. They are ovate, but become more lanceolate toward the midline. The scales are smooth and lack ornamentation. Ventral scales on the anterior of the body are about 2.2 times the height of a nearby dorsal scale, and they increase in size posteriorly to about three times the height of a nearby dorsal scale. They have rounded edges and are smooth. Ventral scales number 251 - 275 (X¯ = 259) in 11 males and 271 - 284 (X¯ = 277) in four females, this small sample suggests the ventral counts are probably sexually dimorphic in this species. The anal plate is divided.
On the tail scales on the dorsum are ovate and smooth, and are in 17 rows.  The subcaudal scales are divided and they number 63 - 72 (X¯ = 66.8) in 11 males and 47 - 62 (X¯ = 54) in four females. Male tails ranged from 16.4 - 22.5% (X¯ = 20.0%) of the SVL; female tails ranged from 12.4 - 16.4% (X¯ = 13.7%) of the SVL. At the base of the tail the width is 85% of the height.
Color and pattern. The snout has a yellow transverse bar or spots; there are lateral postocular yellow spots and a yellow transverse bar one scale behind the parietals. The upper labials are black with some yellow areas. The lower labials are mostly yellow. The body has 60 - 70 yellow bands (Ghodke and Andrews [2000] reported 57 - 66 yellow bands in Andaman specimens) that are one scale wide on the vertebral line, and widen to three scale rows laterally. The ventral scales may be almost uniform in color, or the dark dorsal pigment may intrude onto the ventral surface. The ventral surface of the tail may be banded or each subcaudal may contain a light spot. Juveniles may have bands that completely encircle the body and they have a more intense color (Ghodke and Andrews, 2000).

Habitat:   Cantoria violacea uses mangrove forests and mud flats, but will apparently use nearby freshwater environments on occasion (Rao et al., 1994).  It seems to be associated with the intertidal burrow system which includes mud lobster mounds and crab burrows, and it is active at night. Smith (1943) described its habitat as "Tidal rivers and coasts..." Tweedie (1983) wrote, "This very long slender snake lives on coasts.” Two specimens from Phuket Island, Thailand, were collected in or near tidal creeks in mangrove forest on rising tides (Voris and Murphy, 2002). Frith and Boswell (1978) found a specimen on a mud flat with its head down a crab burrow. Ghodke and Andrews (2000) found it on mud flats in the Andaman Islands, with their posterior bodies in crab holes and they reported specimens in proximity to each other (0.5 - 6 m), in one case they described finding them in pairs. Karns et al. (2002) found violacea associated with mud lobster mounds and mud pools.
Sworder (1923) considered this “A very rare snake.” in Singapore. This is undoubtedly due in part to its microhabitat, the intertidal burrow system, which is seldom explored by herpetologists, or other naturalists.  However, Karns et al. (2002) found this species only three times (1.1% of the 270 snakes collected) at Pasar Ris Mangrove Park in Singapore, while Ghodke and Andrews (2002) considered it “fairly common” in the North Andaman Islands.
Diet and Feeding Behavior: Contrary to literature comments (Mattison, 1995, and others) that this snake feeds on fish and crabs, Cantoria violacea appears to feed exclusively upon Alpheus shrimp (Crustacea: Decopoda: Alpheoidea). The stomach contents of FMNH 250115 consisted of one complete female giant mangrove snapping prawn, Alpheus microrhynchus (thorax length 20 mm, total length 57.5 mm, claw length 30.3 mm, weight 5.1 g); a second specimen, a male (FMNH 250118), contained one complete but digested claw of a Alpheus microrhynchus (claw length 25.7 mm) and one digested decapod (probably the remains of another A. microrhynchus). Two Myanmar specimens also contained Alpheus: CAS 211909 contained one ovigerous female Alpheus sp. and CAS 211919 had remains of three specimens of Alpheus euphrosyne euphrosyne (Voris and Murphy, 2002). Unfortunately there are no observations of feeding behavior in this species and its feeding adaptations may prove to be of interest.
Alpheus shrimp (commonly known as snapping shrimp or pistil shrimp) have some unusual defense and communication behaviors and how these effect the feeding behavior of C. violacea is sure to be of interest. Alpheus produce a loud sound resulting from the collapse of a cavitation bubble in their enlarged pincer, and the collapsing bubble also produces a flash of light (Versluis et al., 2000; Lohse et al., 2001). Thus, C. violacea may use the light, the sound, a chemical spread via a stream of water coming from the claw, or a combination of these to detect and locate its prey.


Venom: The venom chemistry of this species is completely unknown. However, Ghodke and Andrews (2000) reported stories from Karens living in the Andaman Islands who stated that they knew people who had been bitten by this snake, one had died, and another had been unconscious for several days. Bite symptoms included abdominal pain, vomiting blood and swelling at the site of the bite. A folk remedy made from a “cactus-like plant that grows in mangroves” was applied to the bite lesions and taken internally. They acknowledged that Cantoria is usually considered harmless and that it has a similar appearance to the Andaman krait (Bungarus andamanensis).