Comment
This species has been confused with two other species in museum collections since Günther (1864). Examination of the type specimen revealed that it was not conspecific with either of the two species labeled Enhydris jagorii in museum collections. One of those species is Enhydris chanardi, the other is Enhydris subtaeniata (see that account for an explanation). A redescription of the holotype is provided here, and the rational for placing Hypsirhina smithii Boulenger in the synonymy of E. jagorii is also provided. For a comment on its relationship to E. longicauda and E. innominata see the E. innominata account.

Etymology: This snake was named in honor of Dr. F. Jagor, who made a collection of reptiles in Thailand for the Zoology Museum in Berlin.

Distribution  Enhydris jagorii is known only from the vicinity of Bangkok, Thailand, although Smith (1915) obtained a specimen from Hua Hin Beach (12°34’0N 99°58”0E) about 200 km south of Bangkok in Prachuap Khiri Khan Province. It is also known from the Bang Kapi area (presumably Bang Kapi District) just to the east of Bangkok (based on an unnumbered NSM specimen) and an area now considered part of the Bangkok metropolitan area. The type specimen of Boulenger’s (1914) smithii is from the “Menam River” (=Chao Phrya River) in Bangkok. Another specimen (FMNH 179114) has the data Phra Nakhon (presumably Phra Nakhon District), Bangkok; thus, this aberrant patterned specimen is most likely from the city center of Bangkok. It is unclear if the Hua Hin specimen represents a population, or a waif, washed down the river into the Gulf of Siam. Note that Tirant (1885) refers a specimen from Cholon, Vietnam (~12°15’N 105°58’0E) to Enhydris jagorii because it had 106 ventral scales; clearly this is a specimen of E. innominata given the locality and ventral count which is too low for Enhydris jagorii. Reports of Enhydris jagorii from Laos, Vietnam, Cambodia, and elsewhere in Thailand are based on specimens of Hipsirhina enhydris subtaeniata Bourret.

Diagnosis:  A snake with 21 scale rows at midbody that can be distinguished from other Enhydris with 21 scale rows by the flared or petal-shaped anterior chin shields which are longer than the posterior pair of chin shields. Ventral scales number 117 - 127, this will usually separate it from its closest relative E. innominata which has 108 - 117 ventral scales with which it shares a pattern of scalloped black blotches that arise from ventral side and extend onto the dorsum. Its close relative E. chanardi has 21 scale rows on the neck (jagorii has 23 to 25 on the neck) and two pairs of chin shields with the second pair as long as or longer than the anterior pair. E. chanardi lacks the black scalloped pattern and has a wide, bold zigzag stripe on the edge of the ventral scales and first scale row, clusters of scales with dark pigment that form lateral spots, and a ventral count of 110 - 125 (this overlaps with jagorii). E. jagorii’s black scalloped blotched pattern will separate it from E. enhydris which has a longitudinal striped pattern and it has elongated chin shields with the second pair being longer than the first, and a ventral count greater than 153. E. subtaeniata also has 21 scale rows, but elongated chin shields (two or three pairs), a striped pattern on scale rows 1 - 3, dark lateral spots on the scale rows above the stripe, and a ventral count of 136 - 153. E. jagorii can be most readily separated from its close relatives E. longicauda and E. innominata by their ventral counts (jagorii has 117 - 127 ventral scales, longicauda has 124 - 135, innominta has 108 - 117). 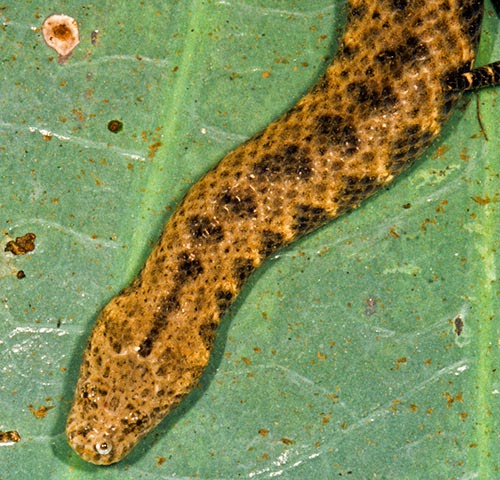 External Morphology
The head is moderately long, wider than neck, and appears intermediate in width between innominata (narrow head) and longicauda (wide head). The head is not as depressed as in either of the other two snakes. Eyes are dorsal and their diameter is about 80% of the eye-nostril distance. The eyes of this species are quite large compared to those of innominata and longicauda.
On the head the rostral scale is pentagonal and twice as broad as tall. The nasal scales are semi-divided, with the nasal cleft touching the first labial. The broad internasal can be single or divided and it contacts loreal scales. The prefrontals touch the loreal, preocular, and supraocular. The frontal is slightly longer than the parietals. The supraoculars are rectangular; the posterior edge is wider than the anterior edge. The loreal is in contact with upper labials 1 - 3. It is usually single but one specimen (BMNH 1928.12.18.1) has a divided loreal. The preocular is single and tall, its dorsal edge is narrower than the ventral edge; there are two postocular scales, and the upper scale is taller than the bottom scale. The temporal formula is 1 + 2; the primary temporal is taller than broad, but even it is very similar in size to the occipital scales and is barely distinguishable from them. The upper labials number eight (87.5%) or nine (12.5%). The tallest upper labial is the sixth or seventh, the fourth upper labial enters the orbit and it too is large; rarely the fifth upper labial enter the orbit.
On the chin the lower labials number 10 or 11; the largest is six or seven. Labials 1 - 4 or 1 - 5 contact the anterior chin shields. Anterior chin shields are longer than the posterior pair and they are flared or petal-shaped . A small pair of scales separates the posterior chin shields from each other. Gular scales number 9 - 10.
On the body the anterior scale rows on the neck number 23 - 25. Scale rows at midbody number 21. Scale rows at posterior body are reduced to 19 - 20. There are no scale ornaments, and the scales become more ovate posteriorly particularly in the more ventral rows . Scales in the first row are larger than those in the second row. The tail is slightly compressed, to about the same degree as in innominata. Ventral scales number 117 - 122 in three females examined; males have 117 - 127. The ventrals are rounded; and wide, about three times the height of a nearby dorsal scale. The anal plate is divided, and slightly longer than a ventral.
On the tail the subcaudal scales are divided and number 48 - 54 in females and 53 - 68 in males; thus, subcaudal counts are sexually dimorphic. Dorsal scales are smooth and ovate and counted from the base of the tail they form 12 - 13 rows. At the base of the tail the width is 83% of the height based upon one specimen.
Color and Pattern. The head is uniform; labials may have some yellow spots or mottling. Vertebral spots number about 38 and occur on scale rows 10 - 14. Spots on scale rows 1 - 8 and 1 - 9 form a series of large lateral blotches that are 2 - 3 scale rows wide. Sometimes the vertebral row fuses with the spots on rows 8 - 9 to form small bars. There are about 38 large dark blotches each 2 - 3 scale rows wide. The lateral blotches are separated by yellow or white bars less than one scale wide. These white or yellow cross bars intrude onto the venter so that they completely encircle the body, forming a pattern of yellow or white rings.

Natural History
Like other homalopsaids they eat small fish, and give live birth.  or reproduction of this species. Its distribution suggests it is endemic to the Chao Phraya freshwater swamp forest ecoregion of the Indochina Bioregion (Wikramanayake et al., 2002). It seems likely that this snake’s habitat may have been greatly reduced in the last century with the urban sprawl of Bangkok consuming much of its known distribution; thus this species may be endangered. In 2006 we rediscovered a population of these snakes in northern Thailand. The masthead for this website depicts one of the specimens we collected.

Relationships
This species is closely allied to E. chanardi, with which it is sympatric and to the allopatric E. innominata and E. longicauda. It represents the most northern species of the group, and remains a poorly known taxon despite its distribution in the heart of Bangkok.