Distribution Coastal regions of northern Australia and New Guinea. McDowell (1979) gave a more detailed discussion of its distribution. I have edited this slightly.


Distribution. In New Guinea, known from the Mimika and Lorentz Rivers (Irian Jaya), the Fly-Strickland River system, including Lake Daviumbo and Lake Murray, the smaller rivers (Bensbach, Binaturi, Oriomo, Pahoturi) of southwestern Western Province, Papua New Guinea, and the Aramia River drainage (I can find no records from east of Balimo on the Aramia). In Australia, I know of definite records from the Daly, Alligator, Koolatong, and McArthur River systems, Northern Territory, and the Leichardt, Gilbert, Mitchell, Lukin, Edward, and Archer River systems, Queensland. Cogger (1975) maps the Australian distribution as along the coast from the Kimberly region of Western Australia to the eastern (Coral Sea) coast of the Queensland Peninsula. Cogger (pers. comm.) notes that this apparent Coral Sea coast distribution in Queensland is a result of the small scale of the map used, and neither Cogger nor Covacevich (pers. comm.) know of any records from Queensland that are not from rivers draining into the Gulf of Carpentaria; Thomson (1935) reported aborigines claim this species does not occur on the eastern coast of Queensland. It should be noted that although the Fly and Aramia Rivers of New Guinea open into the western end of the Coral Sea, they are connected by swampy lowlands to the rivers draining into the Arafura Sea. This species thus seems confined to the freshwater drainages of New Guinea and Australia connected to the Arafura Sea (including the Gulf of Carpentaria). I have not found any records from the Aru Islands or from the islands of Torres Strait.

Size
Maximum length may be 2.5 meters, with 1.5 meters being the average length. Young average about 360 mm SVL. Sexual maturity is reached by males at about 85 centimeters SVL, and at about 115 centimeters SVL in females.


Differs from other species of Acrochordus in each of the following features: 1) nasal bones fused anteriorly; 2) hemipenes forked only at extreme tip, without spines or papillae; 3) pattern with intricate network of dark markings that are connected with one another but isolate spots of the brown or tawny ground color. Additionally differing from A. javanicus (but resembling A. granulatus) in 1) absence of coronoid process on lower jaw; 2) posterior dentary teeth resembling other teeth in form; 3) scales of sides with one main cusp, flanked by much smaller cusps; 4) nasal bones tapering to a median anterior point; 5) maxillary teeth fewer (16-19); 6) dentary teeth fewer (13-17). Additionally differing from A. granulatus (but resembling A. javanicus) in: 1) nostrils directed forward, without upward inclination, separated from eye by 11-14 scales (against 5-7); 2) labial scales less enlarged, with more rows (8-11, against 5-7) between eye and edge of lip; 3) long pterygoid row of 11-16 (against 5-7) teeth; 4) no transversely enlarged scale behind nasal; 5) less compressed tail, its vertical diameter much less than twice its horizontal diameter. (The hemipenial characters of this diagnosis checked on all males of material listed above; external, osteological, and dental characters checked on all material listed above, except nasal bones not checked for MCZ 118668, 118669, 118765, and 129121. In addition, vertebrae in region of heart checked on AMNH 86182 [Borroloola, Northem Territory and found to have short neural spine confined to posterior edge of neural arch, essentially as in A. granulatus but unlike the high neural spine that arises from most of the length of the neural arch in A. javanicus and the Miocene-Pliocene A. dehmi Hoffstetter [1964]).

Acrochordus javanicus and A. arafurae agree in being freshwater forms, whereas A. granulatus is found most often in salt water. This is not an absolute difference, for A. granulatus enters fresh water extensively in New Guinea, reaching Lake Murray in the Strickland-Fly River system and ascending the Sepik River as far as Brugnawi and Ambunti. Conversely, Cogger (1975:362) says of A. "javanicus" [=A. arafurae], "Largely restricted to fresh-water streams and lagoons, wherever monsoonal floods permit them to enter permanent waters; however, they freely enter estuarine waters and the sea." Perhaps A. granulatus is the stronger swimmer (as hinted by its compressed tail) and better able to cope with surf and fast water, whereas A. arafurae is more efficient in quiet ponds and lagoons, where its large size allows it to capture larger prey than is utilised by A. granulatus. Most accounts of the behavior and ecology of Acrochordus arafurae are so thoroughly permeated with observations on A. javanicus that it is very difficult to determine how much is really known about A. arafurae.

External Morphology
They are sexually dimorphic with females generally the larger sex. File snakes are aquatic snakes with small, but very strongly keeled scales, which give them the texture of a file. The skin of file snakes is very loose and baggy. Colors vary slightly, but most are light brown or gray with dark brown or black reticulations extending from a broad vertebral band that gives a cross-banded, or a blotchy appearance on the dorsal surface of the body. File snakes are somewhat lighter underneath, and the dark reticulations usually extend onto the ventral surface of the body (Vincent, 1999). 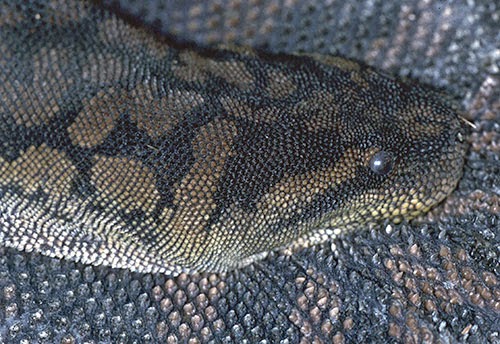 Reproduction
File snakes are viviparous with litter sizes of  6-27 young. Females may reproduce only every eight to ten years in the wild. High population density, low metabolic rates, and poor feeding efficiency are thought to be possible causes for such low reproductive rates. Males are also able to store sperm in their bodies for a number of years (Vincent, 1999). Captive individuals have been reported to live for 8.8 years

Food Habits
File snakes feed almost exclusively on fish. They forage at night, exploring cavities in mangroves and riverbanks. Larger snakes ingest fish up to one kilogram. These snakes have extremely low metabolic rates, thus feed less (about once a month) than many other snake species. File snakes capture prey using their teeth, body scales, and tail.